Prominent: '‘This is a totally new way of doing business’

Three fantastic businesses, one prestigious prize. In a series of reports we get to know all three nominees for the Horticulture Entrepreneur Prize 2020. What did it take to get to where they are now? What challenges did they encounter? What is their vision for the future? This is the first report on Prominent, where we talked to director Jan Opschoor and board member and grower Tom Zwinkels.

How do you get a group of growers to collaborate? Nearly 25 years ago a number of growers came together in the Prominent cooperative to address precisely that question. ‘There was a need to grow together as growers of high quality large vine tomatoes with flavour,’ says Tom Zwinkels, Prominent board member and a grower at Bryte. ‘Prominent thereby always serves the growers.’

We are on Scheeweg in De Lier, in a meeting room that looks out over the hall of the packing centre. We are talking to a director Jan Opschoor and Tom Zwinkels about the organisation of the Prominent growers’ association. The cooperative has undergone a transformation in recent years in order to optimally prepare itself and its growers for the future.

‘The members have grown over recent years in terms of area under cultivation and management skills, whilst Prominent has grown as a cooperative,’ says Tom. ‘Some of them felt more detached from the cooperative as a result. A few years ago we carried out a survey and asked all the growers to think about how they see Prominent in themselves in ten years’ time. That led to a very interesting process.’

‘Prominent stands for collaboration and carrying out entrepreneurial activities together,’ Jan continues. ‘In recent years the association has also invested jointly: in its own nurseries, in this packing centre, but also in things that were not an immediate success, such as the closed greenhouse.’ By investing and carrying out entrepreneurial activities together you accrue knowledge more rapidly, and it also spreads the risk. Joint activities also build up significant assets. ‘We want all members to be able to access that value - but how do you do that effectively? That discussion led to the shareholder structure within Prominent.’

Tom nods. ‘Things feels very different as a shareholder - it gives you much more of a sense of ownership,’ he adds. ‘It’s a totally new way of doing business, which gives us lots of energy. Prominent has thereby become even more of a magnet within which growers think differently about their future and that of the cooperative. Obviously there were some bumps in the road, but we got there in the end.’

Player in the European market

‘They might be catch-all terms, but the trust, respect and transparency within Prominent provide the basis that enables this structure,’ says Jan. ‘The equal status regardless of the size of your business allows Prominent to make this step.’

‘Our vision is that we want to remain a major player in the European market in terms of tomatoes. That means that you need to have scale and quality. We will have to take steps in order to achieve that, and we are already taking those steps, such as rolling out Prominent 2.0.’

‘We have put some of the pieces of this puzzle in place in recent years,’ says Tom. ‘For example, the investments in Groeneweg I and II, and the acquisition of two nurseries from Prominent members. That is appropriate within the new structure with shareholders, and creates more solidarity. But that does not mean that the puzzling and the process now stop, of course.’

The Prominent tomatoes are sold by the DOOR sales team. The arrangements for dividing the area under cultivation by variety are decided twice a year under the guidance of the sales team. The growers meet twice a year for this, and discuss the most ideal allocation of the varieties between the growers on the basis of the data.

‘We’re all tomato growers, but one variety is more profitable than another,’ explains Tom. ‘The demand from the consumer is the priority, so our goal is to offer the European customer as much high-quality diversity as possible. We want to optimise the production and the sales by DOOR Cooperative together every time, across Prominent.’

‘Sometimes we meet three times over three weeks,’ Young continues. ‘We match the demand from the market to the grower’s wishes, and attach a cost price model to it. That means the you have to trust one another, and must give one another something.’

‘As a cooperative we also have 30 hectares of our own greenhouses, which provides us with some flexibility. Varieties that are less profitable are often grown at the jointly-owned nurseries. But ultimately those hectares also need to generate a profit.’

‘We get there in the end every time,’ says Tom. ‘I think that’s great. This year Prominent will celebrate its 25th anniversary, and over that time we have become ever closer as a collective. Our area under cultivation has doubled over the past six years, we are attracting new members and there are some great developments in prospect over the coming years.’

‘Perhaps one of those developments will be winning the Horticulture Entrepreneur Prize. That would give us a real boost for the next 25 years!’

This is the first part of the report on Prominent. In part 2 and part 3 Tom and Jan talk about aspects including the use of data, the development of new roles in greenhouse horticulture and futureproofing Prominent through the Prominent 2.0 programme. 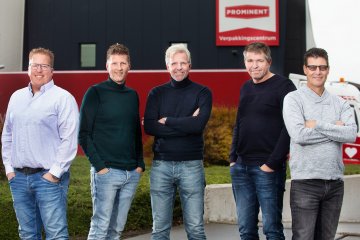